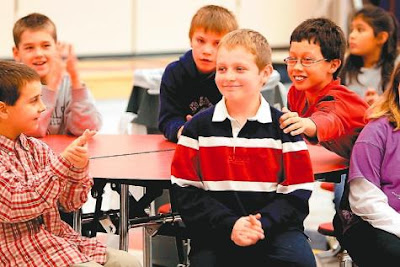 An article in the Middletown Journal on 12/13/2007 by Megan Gildow describes the event as follows:

Local student wins state poster contest - Brennan Curry's entry on the dangers of radon gas will be entered in a national competition in Washington, D.C.

When Brennan Curry walked into the Highview Cafe Wednesday afternoon, he was excited for what he thought was a "Box Tops for Education" pizza party. Sitting at a red table, he cheered along with his fourth-grade classmates from Lynda Goecke's class, never suspecting his family, Tricia, Roger and 4-year-old Madelyn, along with his grandparents, Helen and John d'Entremont, were hiding around the corner.

Minutes later, he learned the pizza party actually was in his honor.

Brennan, 9, was chosen from 66 entries as the winner of statewide poster contest promoting radon awareness.

"I can barely even eat," he said, surrounded by friends and family after the announcement.

Brennan's mom didn't tell him he had won when she found out two weeks ago, she said.

"He's been asking about it," Tricia said. "He beat out middle school kids," Roger boasted proudly. "Middle school and high school kids were in there. It was awesome."

Art teacher Sharon Brown, who brought cupcakes to the celebration, said the school's staff worked together to help the kids enter the contest. "We could win nationals," she said.

As Ohio's first-place winner, Brennan's poster, which features a house and a tree with the warning "get your house checked," will be entered in a national competition in Washington, D.C., said Gail Manning, president of the Ohio Association of Radon Professionals. She was at Highview Wednesday along with Elizabeth James from the Ohio Department of Health Radon Division and Kelli Stewart from Regional Air Pollution Control, the agencies sponsoring Ohio's contest.

The poster contest is designed to raise awareness about the dangers of exposure to radon gas. "You should get your house checked," said Brennan, who said he draws every night before bed. "If you don't, you can get very sick."